Now that the dust has settled, or perhaps the confetti of shredded paper, let’s have another look at the idea of Paleo formula for babies.  Forget the details of the ‘recipe’, consider the logic and the Paleo philosophy.

The Paleo plan is based on the eating patterns of our primal ancestors and a belief in the wise ways of Mother Nature and evolution.  So there would be only one way to feed babies – breast-feeding.  Way back, if there was no breast milk babies died; they died of infections for which their mother’s milk would have provided protection and they died because of the lack of adequate substitutes for breast milk.  The alternative, where a mother died or could not feed her baby, was breast-feeding by a female relative (or sometimes milk directly from a herd animal).  This was possible where women had larger families and lived in close communities – there was generally someone close by who could breast-feed.  This was the case, with an extra option of a paid wet nurse, until around the last 100 years.

Cave–women mothers would not have had the wherewithal or knowledge to prepare nutritionally adequate feeds for a baby’s vital needs. The Paleo view that adults are not intended to use milk as a food does not apply to babies; it is the food for babies that evolution has perfected.  Breast milk’s complexity is still beyond our full understanding, or ability to replicate, but commercial formula offers a safe alternative.  Formula can be prepared based on ingredients other than another animal’s milk, but all formula relies on a wealth of science and technology to do a reasonable job.  Without that knowledge the Paleo baby without breastmilk would have little hope of survival, let alone growing up without problems.

Kay Gibbons
I am a food lover, food writer and dietician, with hands-on experience in pretty much everything related to food for children. My experience has prepared me for consultancy across nutrition & food service areas in health and education.
Recent Posts

We're not around right now. But you can send us an email and we'll get back to you, asap. 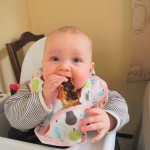 Breastmilk & Vegemite – a clue as to how breastmilk protects against obesity